Message Sent
Thank you for your inquiry. We will respond to you as soon as possible.

With your gift, you can benefit yourself, your family and Snow College, while making a real difference in people's lives for generations to come.   Get Started

You are at: Planned Giving > Gift Options > Donor Stories 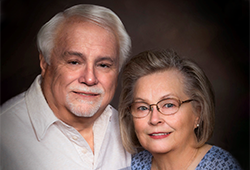 A generous estate gift from Terry and Nancy Foote has made Snow College history as the largest private donation ever received. This donation will provide extensive scholarship support to students for generations to come. In recognition of this important gift, Snow College has renamed Badger Stadium to Terry Foote Badger Stadium.

Terry and Nancy both attended Dugway High School; Terry was the first person from Dugway High School to obtain All-State honors in football during high school which led him to attending Snow College on a football scholarship. Terry spent two years at Snow, where he played football and baseball. He got injured while playing football, but he was able to retain his scholarship and complete school.

Terry enjoyed his time at Snow, especially because he had family in the area, which made Snow feel like home. Terry still visits Snow often and reminisces about the good times he had. Regarding his experience at Snow, Terry stated, "Snow College was the catalyst that helped me to achieve my success in life. I gained the knowledge and experiences needed to further pursue the important next steps to a more successful life."

After graduating from Snow in 1970, Terry completed an engineering degree and worked several years for Hercules Aerospace to design space shuttle parts. After the Challenger explosion in 1986, work slowed down, and Terry volunteered to be laid off. He decided to use his retirement money to purchase an apartment complex; the apartment funds replaced his income from Hercules. He continued acquiring properties until he had approximately 200 apartments and a commercial building. He owned and managed his own company that did all the rental and maintenance work on the buildings. He and Nancy slowly sold all the properties and are now enjoying retirement.

Terry and Nancy are thrilled that their gift will help so many students who cannot afford to attend college otherwise. Through Terry and Nancy's generous estate gift, they are providing life-changing opportunities for so many students. Planned giving allows donors to allocate funds to any area at Snow College while leaving their legacy through an estate gift. Many scholarship endowment funds have been created from estate gifts, allowing the donor to name the scholarship and choose criteria for students who will receive support from the fund, upon the funding of the estate. You can structure your bequest to leave a specific amount of cash, securities, or property, make the gift contingent on certain events, or leave a percentage of your estate to benefit students.

The official legal bequest language for Snow College is: "I, [name], of [city, state, ZIP], give, devise and bequeath to the Snow College Foundation, a body politic and corporate of the State of Utah, [written amount or percentage of the estate or description of property] for its unrestricted use and purpose."

Individuals like the Footes who include the College in their estate plans are invited to become members of the Heritage Club. The Heritage Club is a special group that recognizes donors who notify Snow College of their thoughtful gift intentions through an estate provision, regardless of the amount.

For more information about joining the Heritage Club or making a planned gift to Snow College, please contact Janie Harris at (435) 283-7062 or via email at giving@snow.edu.

Let us help you with your gift plans